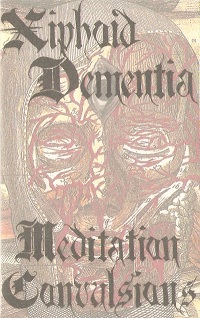 I have a feeling that there were no indifferent people left after listening to extremely powerful Xiphoid Dementia full length album "Might is Blight". There were some disappointed persons here and there, who were not very happy about the final realization of a CD, but these were minority. I thought that such album would become a history of industrial and everyone will sigh non-stop for years. But 5 years passed, Might is Blight drowned in overload of information and I don't remember when I had taken it from a shelf for the last time myself. Xiphoid Dementia is a project of a person, responsible for Existest Establishment label, long-living webzine etc. To say it in short, Egan is a person with clear vision of music and quality. I was very excited upon hearing about the first and only tape of this project, that was released in edition of only 50 copies. Nice cover with slightly modified pictures of anatomy. I was expecting very much from this recording and perhaps my expectations were too high for after listening to the tape for the first couple of times, I was a little disappointed, but after some time I am still listening to it and quite enjoying what's in it. There are three tracks in this tape, all of them entitled in melancholic mood, specific to Xiphoid Dementia and soundwisely they are perfectly suitable for autumn evenings. The first side of the tape - title track of the album, Meditation Convulsions. The track is long, rich and colorful in sounds. The tones are cosily and warmly dark, smelling of dreariness and intangible uncertainty. Not to talk abstract rubbish, soundwisely it is thick and multilayered digital drone that gets warmer recorded on tape and gets even more shades and saturatioin. There are times when Xiphoid Dementia wanders from massive drone to analyzing absolute silence or ghostly solitary planes of piano sounds. The more I change sides and listen to them, the more details I find in these sounds that I managed to miss before, and the more beautiful and full becomes this nightmarish sound story. The title track becomes slightly too difficult for me, but it's anyways interesting. B side suits very well to me. It is more clear and though very rich, but more typical industrial/ambient sound - reverbed percussions, troublesome howling instruments, field recordings, metal sounds, and all that covered with droney synths. Noises reminds me of Fire in the Head in places, when you listen not to chaos, but simply intimidating, floating and suffocating sound avalanche, consisting of so many separate sound layers. Intense and very nice first track on side B. I don't quite understand where the tracks are separated and the second one starts, but the side ends with gloomy clanging of metal pieces and somewhat lightly nostalgic melody in the background. Well, let's say this melancholy is the track beautifully entitled "It was an Empty Place at Night". Nice tape. I doubt there are lots of people who heard it, but I guess after two years after release of this tape, it is not relevant anymore. And I also hope I am not right here. There will be no empty spaces in my head tonight, they will be filled with pictures, inspired by these dreary sounds.