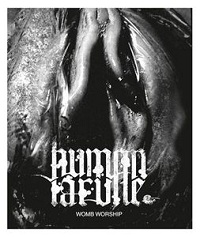 Human Larvae is a conditionally young project under the German industrial/power elecrtonics flag. In the past German scene was very strong and leading force in power electronics scene. Though German scene is not that active lately and gave up the leader positions to harsher and more brutal (conceptually or soundwise) projects, there are names that are still loyal to the sound and specifics of it. What can describe better German industrial than strict structure, and dark, oppressive atmosphere? Anyways, Human Larvae, that could be called the newer generation, deviates further from pure traditional canons and it is one of the most interesting power electronics phenomenons at the moment in Europe or maybe in the whole world. Womb Worship was released in 2013 and recorded a year before, is the latest Human Larvae album. The album title in two words describes the whole concept of the album and it would anger some random feminists without a doubt. It's HER worshipping. And she is painful, saint and filthy, excruciating, stimulating and possessed picture of a woman. Is it the album about love? Yes, without a doubt. It's about lustful, weird, slightly sick love to a mother. And mother's shining love to that what was the part of her body in the past. Since I have something for piano sound, I was fully into this album from the very first seconds. It's slow and heavy, and no doubt why the style "doom" is in description of it. I'm no expert of doom metal, but from what I've had a chance to listen to, mood and oppressive atmosphere, projected into industrial, would sound exactly how Human Larvae sounds in this one. Barely moving sound layers, slow repetitive loops, painful voice, isolated in loneliness adds up to such suffocating wholeness that the first thought to just enjoy erotic hints in this album quickly disappears and transforms into self-guilt and sickness from your own thoughts. And what's most important in all this - it convinces me. No surprise that only 3 full albums were released in 7 years. Themes are explored and felt deep within to the very end, and then transferred to listener. Though it's quite often that I have easier time listening to albums that are pulsating energy, quickly moving forward, themes suddenly change etc., but this one does not become boring at all. I'm spinning it for who knows how many times and I think I'll do that in the future because it's a special soundtrack, devouring you with the whole night and spitting you out to be born next morning. I guess this review was one of the most abstract ones lately, but I'm not able to analyze this album from technical side or so. It must be listened to cause it's especially beautiful kneel in front of the altar of femininity.