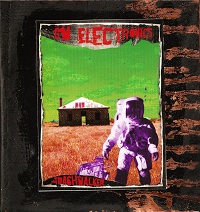 GM Electronics is a noise project from the Czech/England musician Jiri Balsinek. A decade of activity, with slight interruptions, and approximately 10 releases. Most of them were released in his own Chimera label. The last CDr of the project, Trashwalker, that is spinning in the player now, has been released via Existest Establishment label from USA. The previous version of this album was released in 2004 in Cyber-Blast-Records and if my information is correct, the original release has been made even some time before that via I.N.K. Recordings. So this album is being re-released for the second time already and I'm getting curious why is that. About the packaging itself. It's not the first quite originally looking release from this label. CDr is packed in approximately 7" size envelope, made from some sort of thin copper paper that is covered in tar from the outside. This isn't something that you can stare and adore, but it fits the concept of the release perfectly. I don't know if the sound is different from the previous versions of this album because some of the track titles are different, but I think I've read somewhere that it has to do something with the artist just changing the titles and that's it. The most important thing is that the first track title is unchanged - Snusmumriken (inspired of course by Tuve Janson). You can see what the whole album will be like from the first track because the formula does not change that much - the sound is chaotic, multilayered, digital harsh noise. For those who are afraid of the word "digital", I'd say that despite the clear sound, the album and compositions in it are truly superb and I've listened to it quite a few times already and didn't get bored yet. It's the sort of chaos that fascinates, does not go past the boundary to nonsense and at the same time keeps the intrigue and interesting sonic structure. From the second track I already get the parallels with Michael Page, but Page is not that intense and perhaps slightly more atmospheric where GM Electronics travels the distorted post apocalyptic reality where only survival instincts and need for moving forward are active. And since we talk about atmosphere, emotions and feeling, the most melodic and weird track in the album is Dismantled Emotions. Distorted melody of some string instrument flies above the thick array of noise. Such a weird mood.. It sounds as if chamber orchestra would have been isolated in the psychiatric ward and right before the demolition of the building, they start playing some sort of a track all together. Lovely insanity that continues and gets more intense in "Cryohydra" after a rather boring track "Flesh on Fire". Massive textures of sound and growing suspense with roaring sirens in the background. The loop of time right before the death where you suddenly find yourself fighting with all the hydra heads of your own mind. The disc is finished with the most silent title track "Trashwalker" - manipulations with synth and pieces of noises and various sounds placed above the static note. It seems like the hum in your ears after such a noisy album - a pleasant silence or uncomfortable feeling... All in all it's an interesting work. I can't see it becoming the new classics of the genre or praise it for innovations, but I had a good time listening to it. And the packaging is fantastic. Digital apocalypse among snusmumriken...