Stratvm Terror - This is my own hell 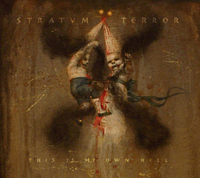 While listening to Stratvm Terror I've understood that lately I've been spinning less and less releases from Swedish legion of CMI in my player. It is difficult to say why. Stratvm Terror does not fully qualifies to this category, but one person from the duo, Peter Andersson (Raison d'Etre, Atomine Elektrine etc.) raised such thoughts. "This is my own Hell" is the eighth work of the duo, released three years after their last CD. This album is a nightmare that lasts for more than an hour, a soundtrack for apocalypse when the faithful one apprehends that his saviour and messiah is nothing more than a piece of trickery and reality is the grotesque in front of his eyes. These visions are reflected in wonderful cover of the album, Boschish paintings of Mia Mäkilä that strengthens the mood of the album even more. The sound in the album - doom ambient, if such a term would be valid. Khanate, mixed with Swedish dark ambient in approximately equal proportions is the recipe for this album. Massive, trembling lines of bass guitar, abundance of metallic sounds, various noises and tearing everything apart vocal. Namely in the track with vocal, "My Hell", this album uncovers its whole horror. The feeling is like the last day had really come - sounds are tumbling one over another, everything is squeaking so that it seems that audio equipment will explode and scatter in the room and on top of that - howling voice that now is lost in the chaos, now diving out. Other tracks in the album are like gradual movement and small steps towards culmination while picturing the terror that happens in inner and outer world from various degrees. After that - logical finale. The last track - "Now Ever Sleep" is catharsis after living through your own hell. Yes, this album works if you concentrate and have a deep journey into the sounds of it. I managed to understand just a tiny bits of it after the tenth or fifteenth listening session. But I must say a few things more. First of all, there are differences between sound levels in every song and they are unbelievably huge. The minutes at the start and at the end of tracks are absolutely silent and the middles of songs are tearing the ears. Of course, such trick amplifies the overall impression. You feel bigger and bigger ammount of sound falling on you. But otherwise it's irritating. You won't be able to listen to this album silently. The second thing - despite everything this album seemed rather empty. Beyond the shell of the nightmarish visions and mass of sounds, you find nothing if you go deeper. Yes, bleak. But that suits the overall conception of the album so I abstain from any further comments. Anyhow, this album is worth attention. I think it got it already.