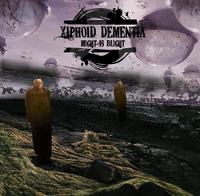 This is one of the weirder albums that I've had a chance to listen to lately. I cannot decide how to evaluate it because everytime I listen to this album, I get absolutely different emotions and thoughts. One thing is clear - it is best to listen to it when it's dark or growing dark outside or when it's not quite ok with your mind. During a full moon, let's say. Maybe it's personal, but quite often I was left asking myself why the album looked so good just yesterday and now it seemed absolutely colorless. Time of a day, state of mind...
This release is very strong from the technical side. Clear, multilayered and precisive sound, rich and varied compositions, continuously evolving and convincing. But it is impossible to describe the full album in just a few words. I haven't heard creations of Xiphoid Dementia before, but in this album, it seems that the most important of all is the main goal/thought of the album, regardless of tools or style. From elements of musique concrete through dark ambient to neo classical, noise and even touch of power electronics. Album starts with majestic title piece where martial rhythms, synth melodies, squeaking foundations of reality and woman voice forms one strange and frightening creature. It sounds like it would be a soundtrack for a final massive scene in the movie. The following song smells of a sea. "Never Power Ocean" transforms from calm and meditative to curiously exploring song. I've lived by the sea for the last several weeks so I can tell without a doubt that these sounds convince me. It is true, sea and ports in there differ from the ones I've seen. This piece is more like exploring the ships that'd sunk long time ago and now rests here, covered in rust and absolutely still in silt. Gradually you move there and become the part of the world, existing there. From careful touching of sound textures, this piece transforms into fierce attack of noise, which, after 20 minutes of rather calm album is a rather unexpected cold shower. By the way, it is worth mentioning that all the pieces in the album plays more than 10 minutes and the whole length of it is well more than one hour. The next big picture of Xiphoid Dementia - Dead Hunter. This track continues the active noise of the last one - siren, synth sounds and voice. Vocal that appears in the middle of the album surprises once more, but I cannot get myself to like it. It seems that it does not fit in there and I cannot glue the voice and music into one picture anyhow. Next station - by the strange highway. Creaks of constructions, squeals of brakes, sounds of broken glass and finally the sound develops into rhythmic noise. It seems that in these two tracks, the culmination of the album was reached. Mechanized Salvation - anxious and full of strain, but not openly aggressive track. It sounds more like a futuristic model of the world. Penetrating metallic darkness when you try to see what's in front of you and not realize that the real danger is behind you. Xiphoid Dementia plays one more game in the last track. None Shall Inherit The Earth seems like a calm and dismal landscape from the first seconds. So you prepare yourself for happy ending, but after a few seconds this insipid and tender vision is teared apart by fierce vocal (in here I like how it goes) and this piece is raising the strain till it explodes and soft sounds are covered with a layer of noises and effects. The sight becomes different than it seemed from the beginning. It feels like Xiphoid Dementia specially tortures you and doesn't let you breathe easily. Album stops and ends. This is really one interesting and not ordinary release, full of colors, consonances and moods. The pieces themselves (the artwork hints that too where every separate page is dedicated to separate song) works as if they would be separate pictures, visions, stories. Long, complex and versatile... I like this work of Xiphoid Dementia tonight. I like the suggestiveness of it when the first snow falls and they greyness is here.